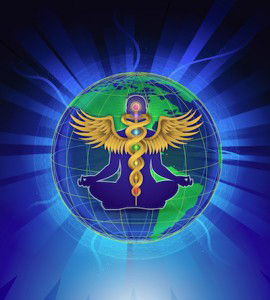 The practice of Kundalini is a spiritual discipline that allows a person to extricate oneself from the limitations of the material body.

There are seven energy centres (chakras) situated in our etheric body.

The Kundalini lies dormant, coiled three and a half times situated in the base chakra at the base of the spine. Kundalini in it's raw context is sexual energy.

The awakened Kundalini seeks to rise up the body passing through the chakras to merge with the crown chakra (God head) above the head.

When the full potential of Kundalini merges into the crown chakra a person attains the state of Nirvana (Buddhism) or Samadhi (Hinduism). This is the highest state a person can attain.

When Jesus attained this state he declared I and the Father are one (John chapter 10 verse 30).

When a person attains this state they reach a state of complete enlightenment, free from all suffering and filled with supreme happiness.

Another name for attaining this state is called Buddhahood (Buddhism) or son of man (Gnosticism). The analogy is that just as the Creator burst forth from material matter so does the Gnostic liberating themselves from the material body through the perfection of Gnosis.